Video Live Performance of the Play "Don Quixote" during the mobility in Spain in May 2015: 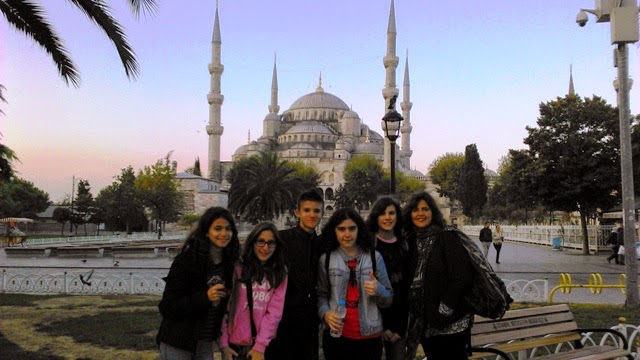 Agreements:
-          Multimedia Phrasebook:
o   Format proposed by Spain.
o   Each country presents its acomplisements:
§  Poland: they are missing audio
§  Bulgaria: They only have the sentences in English, they have to complete it.
§  Romania: They have to insert images/illustrations made by students, others need copyright permission. Audio can be heard in some of them and in others, you can hear nothing:
§  Turkey: They need the web password to upload their products. Spain’s ICT coordinator will send it to them shortly, but the best solution is for Turkey to send the documents and files to Spain, and the coordinator will upload them
§  Italy: They have finished it and sent it to the coordinator, but it hasn’t been uploaded yet. Please send it back to the coordinator, to verify why it was not completed yet.
§  Spain: finished, including the introduction.  See http://iesjavirtual.es/comenius/files/frases.swf
o   Note: If someone has any problems to complete it, Spain may send a tutorial in order to help you.
-          Democratic Values Brochure/Leaflet
o   Every country has finished their own. Either leaflet or brochure, as it was agreed in Bulgaria:
§  Poland: leaflet
§  Bulgaria: brochure
§  Romania: leaflet
§  Turkey: pending to upload it.
§  Italy: leaflet (it’s finished, they bring it to the meeting)
§  Spain: brochure.
o   Every country has to insert in their leaflet or brochure the winning cover from Spain. http://iesjavirtual.es/comenius/files/portada_democratic_values_leaflet.pdf
o   The winning cover was voted by 1 teacher and 2 students from each country. Spanish proposal won it.

-          Traditional Story
o   Students from the different countries performed their traditional story adaptation, either through a video or a live play.
o   The end of the story will be finished by Spain and uploaded it, sometime in November.
o   It is agreed that it is necesary more rehearsal and preparation in order to have it performed as a whole. It will be performed in May in Spain by students of the different countries. Each country will bring their clothing, helmet and all the necesary equipment needed, and all this will be shared if required.
o   A booklet is to be published with all the traditional stories (one per country where Don Quixote returns to Spain after this long journey. This booklet will contain illustrations which will be elaborated within the Reading Plan, (each country will elaborate their own).

-          Food and Nutrition Book
o   It was agreed, based on the amount of recipes (120) in two languages and the dificulty it carries in its perorming to publish only 60 recipes, this implies that each country will have ONE recipe per chapter. This way there will be 10 recipes per country in two languages, which will make a total of 60.
o   A one day Menu will be included per country.
o   Poland will make the layout of the food and nutrition book. Six copies will be made, which will be brought to Spain, one per country.
o   Italy’s proposal is kept. This is that each recipe will include a part with “Additional Information” where a little history of the recipe is included, as wll as when it is recommended to be eaten, etc.

-          Sporting Competition
o   During the meeting in Spain, 18, 19 and 20 May, the final competitions of Voleiball, Basketball and Football will be held. Bear this in mind when selecting your students to come to Spain.

-          Reading plan
o   The agreements regarding the Reading Plan are as follows:
1)      Each country chooses a character from another country.
2)      Students are to research on the historical social and political character background in the Language and Literature class
3)      A fragment of the book or a character’s story is read in class.
4)      The characters’ values are recognized and discovered. Alternative narrations are created from the original one, etc.
5)      In collaboration with the Art teachers, illustrations, caligrams are created; recreations of chapters or scenes are to be held, based on their readings, etc.
6)      These creations (images, drawings, scultures…) are to be brought to Romania (any format, including the digital on) and are presented to all of us.
7)      Each country will make a drawing of each character, that will be included in the traditional story booklet like illustrations.
o   Once agreed on the above procedure, each country chooses their character as follows:
§  Don Quixote:                                    BULGARIA
§  Nasreddin Hoca:                   ROMANÍA
§  Giovanni Boccaccio:             SPAIN
§  Yordan Radichkov:               ITALY
§  Vlad Tepes:                           POLAND
§  Nicholas Experienceky:         TUKEY
-          Joint song:
This product is going to have two different songs:
a)    Traditional song:
o   Spain proposes that each country researches a song related to the democratic values within their traditional folklore.
o   It is agreed that each country searches a traditional song or one that it is created by the students where some democratic values are dealt with, in case they are not found, it will be considered enough the traditional song itself.
o   In Romania, students will interpret the chosen or created songs, in their mother tongue. This performance will be recorded by the Romanian team.
o   After the Romanian mobility, each country will receive their own recordings, including subtitles in English and they will be sent to Spain so that these songs can be played with their subtitles in English.
b)   Flashmob:
o   Spain is going to create, with the help of the other countries, a song or performance like Bollywood, where more and more students are joining litle by litle.
o   Spain will start this idea, and other countries will participate through videoconferences. There will be previous recordings on the web so that students from other countries are learning them.
o   The last day of the mobility in Spain, it will be performed

OTHER AGREEMENTS
-          It is recommended to use more frequently the ICT tools we have such as: wiki, blog and Facebook.
-          All the products that are finished have to be uploaded to the EST (European Shared Treasure) database.
-          It is agreed to hold a new videoconference on November 25th at 11 a.m. Spanish time. The topic to be dealt with in there is the Reading plan characters. Students will have to share the characters peculiarities, ideas for caligrams o drwaings, etc. Bulgaria will coordinate this videoconference using Webex, which continues to be free of use.
-          The next mobility meeting will be held in Romania on March 23, 24 and 25. Adrian, the Romanian coordinator, comments that they have about 18 to 20 host families. Esther proposes that some teachers might host some students and they are going to look into that. She is asking how many students  each country is going to take to Romania.
Alcorcón, 21 October, 21-10-2014


The Comenius Project "Democratic Values and Linguistic Diversity" has just had Mobility 4 in Sofia, Bulgaria. You can see information about this mobility clicking on this link

You can find a lot of information on the Videoconference which was held on March 20th among the participating countries in the project "Democratic Values and Linguistic Diversity" if you click on this link:
You are invited to continue our discussion on the topics discussed:

2.  Poland presents the results of the Democratic Values Questionnaire sharing with the participants the important observations and conclusions – 12-15 min

4.    Then we open the floor to students and teachers sharing what they think about the guiding questions for both topics. 1.5 min per participant - ab. 20 min for this part.

5.    Team work on cases: Teams work on real life cases for 12-15 min. The teams are supposed to look into the case and decide as a team how to solve a problem using democratic strategies in a school environment.

The whole event rounds up to between an hour and a half and two hours but according to us, it is more lively and allows students to speak their views spontaneously and not just present prepared information.
Videoconference 20-03-2014
School Regulations: A democratic instrument or a control toolkit
A. Guiding Questions:
1. Who creates the school regulations in our school?
2. Who takes part in writing them and announcing them?
3. What is its purpose? Do we need it? Why/why not?
4. Who takes more space-the Rights or the responsibilities, the rewards or the sanctions?
5. Which is the greatest Challenge: a)to create it, b) to follow it, c) to control it
6. What Tools does democracy give us to improve school life in connection to school regulations?
7. How would the ideal school regulations look like? Be imaginative…
8) Do we need improvement and how can we all profit from it?
B. As a result of the discussion we will also be looping for the answers of the following questions:
1. What is life like in a well-functioning democratic school community?
2. School regulations- contributor to democracy?
3. Is there space for creativity and artistic expression?
C. The discussion is based on a conversational model aiming at:
1. analyzing and understanding in depth
2. extracting the valuable in all points in view
3. creating a constructive Communications
4. coming up with applicable solutions
Videoconference 20-03-2014
Cases Proposal
The teams are not supposed to prepare in advance, the challenge is to exchange opinion and come up with a short action plan 3-5 steps to solve the problem in a democratic way and propbly some preventive methods to avoid the same problems in the future if possible. The cases will be assigned to the teams immediately before the team work. /Item from the Procedure/
1.     You come to school in the morning and find that someone has painted graffiti on the school walls and some of the school sports equipment. It quickly becomes clear who is the graffiti student, the student is not hiding. What do you do with a student? How do you restore/clean the walls and the equipment of the school?

2.    A student often arrives late for the first lesson or after the long break. This breaks the concentration of the group and the teacher. Some of the students feel it is not fair to tolerate this behavior, others are tempted to follow the example. The teacher is also quite resentful of the situation. All this creates tension and energy leak in the classroom. What would you do to solve the problem?

3.    A student is often getting distracted with a mobile phone in class. When invited by the teacher to leave the phone aside and focus on the class task, the student neglects the teacher and goes on texting. The teacher wastes even more time dealing with the issue and the work of the group is disrupted. How would you cope with the situation in an efficient way?

4.    A student has become notorious for easily getting into conflict with everyone for no obvious reason. The student is always ready to pick a fight and even use violence. The others often scared and try to avoid contact. A few behave as if they like this demonstration of power and want be best friends with the aggressive student. How would you work with this problem?

When you think about each case, try to discuss it in perspective and find long-term effectiveness. Make sure your steps are directed not only to the person who creates the problem or demonstrates it, but also to the school community.
Enjoy your team work!
CASES
Publicado por Unknown en 4:16 No hay comentarios:

WIN A TRIP TO ITALY

Here you can find the Book Cover Contest Rules as well as some orientation to create covers.

We hope this is useful for all of those who are willing to participate in this contest.

As for Spain, the winner will be selected to travel to Italy in April 2014

Democratic values in european union from comeniusiesja
Here you can find a presentation made by students of IES Josefina Aldecoa on the Democratic Values in the European Union and a comparison with this school.
Publicado por Unknown en 8:29 No hay comentarios:

You can see the first approach to the work which has been done on Don Quixote, especially by the Department of Spanish Language and Literature at IES Josefina Aldecoa (Spain) with their pupils.
Congratulations! and keep improving!
Publicado por Unknown en 15:02 No hay comentarios: